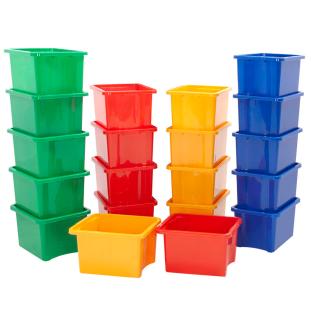 I’ve always had bins of stuff.

Being organized doesn’t mean you throw things out; it means you are very good at storing your stuff in containers. Birthday cards since I turned 4, report cards and other important things like that.

That was what prompted me to get my kids storage containers; I understood the need for stuff,

We put them on a shelf in the garage with clear directions that that’s where all their stuff belonged.

Still, though, odds and ends showed up on my counters, bookshelves and in my cutlery drawers. I dutifully removed anything that didn’t belong in my space and put it in theirs. I was using their containers; they were not.

Time for a new plan. I moved each child’s storage container to his/her room, found a good spot for each one, and we were good to go.

I was ready to reclaim my counters. Only my stuff belonged there.

It was good for a little while and then it started happening again.

I pulled a Siddur off the bookshelf and out came 3 sticky hands and a bouncy ball.

I reached to get a salad bowl in my cabinet and out came two lego guys, one set of lego pants and a strange looking Lego head.

I reminded everyone about the rules. I put the stuff in their boxes.

But it still wasn’t working.

Ok, they needed something convenient. Maybe if it was right near the kitchen, close to the apparently very popular cabinets, counters and drawers, then maybe just maybe they would keep their stuff where it belonged.

I told them I was not going to be the police of their precious stuff. They had to find safe places that didn’t involve me.

And so I figured out the perfect arrangement that would work, for sure.

I fell in love with it at Ikea and knew it was the answer to keeping everything in its place. There was room for books and games, and most importantly, enough cubby space for each of my kids to have their own bin stowed there.

We did the great change-over.

I knew it would work. I could smell success.

They were excited too.

Only a day later I found someone’s collection of plastic frogs in my oven mitt drawer. I quietly put it back and didn’t make a big deal about it.

Then I found a slap bracelet and a light-up pen were my forks belonged.

And yesterday, when I pulled my Pyrex tray out of the milchig cabinet, I got hit by a pack of cards and a bag of marbles.

What is going on here, why aren’t they keeping their stuff where it belongs??

“Whose are these? They belong in your bin!” I called to noone in particular; but it didn’t really matter because the kids were all outside playing; no one heard me anyway.

And it finally clicked.

I was missing the point.

It was not a matter of having a place to keep their stuff.

It was about a place to keep their most precious stuff of all their stuff.

They want it in my kitchen.

They feel safe if it’s in my kitchen.

They feel safe it it’s in my space.

They feel safe if it’s with me.

With their most precious items.

But what a compliment!

No matter how hard I’m trying to train them not to trust me, it’s (thankfully!) not working.

I quickly and carefully tuck the cards and marbles into their hiding place behind the rest of the Pyrex trays and close the cabinet door.

They can always trust me.

I  will happily take the compliment.