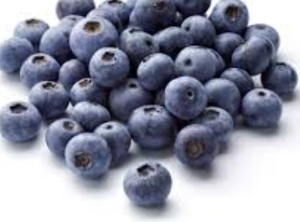 I got my baby in the front seat with the strap secured and my three year old in the back of the cart. Mine is not the type who will walk around the store holding onto the cart. To him, life is an exciting party. And walking around in Walmart would be a dream come true – and make that running, not walking. It wouldn’t work. But that part was fine, they were both safely seated.

I needed strawberries and blueberries. And that was when I realized it wasn’t going to be simple. I could either put them in the back of the cart, and surely my three year old would eat them all. Or I could put it in the front seat near my one year old, but he would definitely polish them off too. So… that left holding them. I had the genius idea to take a plastic veggie bag and put the berry containers in it for safety purposes and continued my quick shop, pushing the cart with one hand and carrying my fruit safely in the other.

Cans and closed packages were safe in the back of the cart. Well, almost. Until I noticed my three year old making his way through a family bag of chips.

I added the chips to my flimsy vegetable bag that already had the blueberries and strawberries and continued pushing my way through the aisles at a rapid pace. So grateful to see Bamba, I grabbed two off the shelf for them to snack on, hoping it would buy me some time.

As I stopped for a bottle of orange juice in the open fridge, I noticed some little black rolling things on the floor. It took only a moment for reality to sink in.

Those. Were. My. Blueberries.

Slowly and steadily falling through the hole at the bottom of my flimsy vegetable bag. I tried to hold it from the bottom but that just made them slip out some other way.

I wasn’t sure if I should laugh or cry.

Two kids in the cart. My hands full. And blueberries steadily falling from my full hands.

Why did I stop here?!

Stop and look around.

This is actually hilarious.

A three year old and one year old having a party in the shopping cart, a mother holding an overflowing flimsy vegetable bag with blueberries rolling all around her.

I slowly inched towards the vegetable section again and got a second bag… losing more blueberries with every step.

I slowly shifted everything into the next bag…and decided not to check how many berries were actually left in the carton.

And with all the integrity I had left, I scooted around making a mild effort at picking up some of the dropped goods and throwing them out, while still holding my plastic bag full of goods.

I headed to pay. We were done. I made it, even though I only had half of my blueberries to show for it.

I got back in the van and breathed. I promised myself I would not do this again.

I need just a few things in Walmart. I have my 1 year old and 3 year old with me. I know it’s not a good idea but I’m right here and just need to run in…

But I am wiser. I grab my black cloth bag and sling it over my shoulder. I am prepared.

I hoist my two little sidekicks into their respective seats of the shopping cart and confidently walk into the store.

As I grab the items I need, I divide them between the cloth bag and the items that are safe amongst toddlers get deposited in the shopping cart. I’m smiling smugly the whole time. Granted, my cloth bag feels like it weighs about 50 lbs by the time I leave, but I’m light on my feet.

It’s one of those special motherhood moments.

A moment that’s hard to explain to people who aren’t in the midst of dealing with toddlers.

That moment when you, grown adult mother,  successfully outsmart your toddler. Now that is certainly something to brag about.

2 thoughts on “Errands, Toddlers and Blueberries”